Berkeley Professor: Hizbullah and Hamas "Part of the Global Left" 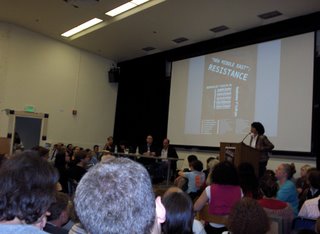 A good friend of mine and loyal reader of this blog took issue with the cut-up of the Berkeley Teach-Ins Against War event, that I posted late on Thursday night. He charged that instead of crudely bashing the speakers, I ought to have engaged the "complex arguments" presented by them. I regret to say that I will not be able to do that. I simply did not hear any such arguments. Perhaps I entered the event with the wrong kind of attitude. But I came away with a very different impression of the teach-in than my friend.

It is true that the various panelists repeatedly pointed to the large number of Lebanese civilian deaths caused by 's air campaign. I do not object to this. From the first days of the war, we at Kishkushim have expressed our sorrow about the deaths of Lebanese and Israeli civilians in the conflict. The Israeli government and military cannot escape the soul searching that the loss of civilian lives requires of them. I want such soul-searching to take place with the aim of averting more civilian deaths. But that is simply not the type of discussion that I witnessed on Thursday. When all was said and done, I left that teach-in feeling as if I had sat through a sophisticated, two-hour commercial for Hizbullah. I say that not to discredit or smear those who criticize but rather to provide some context for my admittedly harsh attack on the panelists.
Let me begin from the end. Ironically, during the question period after the five speakers had finished, one member of the audience asked Judith Butler why she had included any critique, however weak, of Hizbullah in her discussion. She responded with an astounding statement that N has already cited. “Understanding Hamas and Hizbullah as social movements that are on the global left is important,” she said, “but [it] doesn’t stop us from criticizing them.” I know that some of our readers would applaud such a statement. For them, the global left, in any case, represents hypocrisy, foolishness, terrorist appeasement, and antisemitism. But despite all the terrible things I have seen among movements that identify themselves as “leftist,” I still believe that the “global left” stands or ought to stand for values that are diametrically opposed to those of these two organizations.
In fact, speaker after speaker at the teach-in, made efforts to embrace Hizbullah as part of a “left” opposed to the right-wing forces represented by the US and Israel. Thus, Charles Hirschkind, claimed that “since the end of the occupation, most of [Hizbullah’s] activities have been focused on social services,” and that the movement “increasingly showed itself to be a positive force,” with no desire to create a theocracy in . The , on the other hand, although it claims to be fighting al-Qaeida with its “war on terror,” is actually trying to liquidate Islamic activists worldwide. Hizbullah is at the top of its list, together with the Muslim Brotherhood in , which Hirschkind described as having been “peaceful since the 1950s” and as one of the key groups involved in the struggle to democratize Egyptian society.
Like a number of other panelists that night, Hirschkind scoffed at the notion that Hizbullah is a terrorist group. “The label ‘terrorist’ is radically inaccurate for describing resistance,” he said. Indeed, Hirschkind’s argument continued, most “terrorists” in the are not really terrorists, and certainly not Muslim fundamentalists. Suicide bombers share a commitment to resisting foreign occupation, not to Islamism. And suicide bombings are “the strategy of the weak against vastly more powerful adversaries,” which have nothing to do with “a culture of death.”
Saba Mahmood, who opened the talk, also did her best to rehabilitate Hizbullah. In a list of impressive achievements of the Lebanese in recent years, she included “successfully driving out the Israelis.” Of course, Hizbullah has claimed that particular achievement all for itself, so that heralding it as impressive, is another way of giving the organization kudos. But more perversely, she argued that Hizbullah had contributed positively to fashioning a new political ethic in that ensured coexistence. As evidence, she cited the lack of Hizbullah reprisals against Christian militia men in southern after the Israeli withdrawal in 2000. She also painted a rosy picture of the national dialogue in before the 2006 war. Interestingly enough, she did not mention once the assassination of Rafik Hariri by pro-Syrian forces. Indeed, the only person who mentioned Hariri was Zeina Zaatari, in a derisive reference to “clientism.”
Zaatari’s talk, as N has already written, was the most blatantly propagandistic among the five that night. She extolled Hizbullah’s services, and reiterated that “its interest has always been driving out .” Zaatari lauded Nasrallah: “He spoke to the people; he talked their language.” She also made a cryptic reference to the lands that had taken from in 1948! “The creation of the state of was a hostile act not just against the Palestinians but also against other Arabs,” she said, “ lost 7 villages then.” Danny Rubinstein published an article about this claim during the war. Unfortunately, the full text is no longer available online, but an excerpt can be found here (it’s near the bottom of the page, search “Rubinstein”). Yoav Shtern also wrote a longer article about these villages in Ha’aretz, which I have only found in Hebrew. While the Sykes-Picot agreement allotted these 7 Shiite villages to , the 1923 border demarcation assigned them to Mandatory Palestine, and the UN recognizes them as belonging to . The point is that Zaatari’s claim, about the seven Shiite villages that “stole,” is embraced by the most ardent rejectionists in . It was employed specifically by Nasrallah to justify Hizbullah’s ongoing presence in the south despite ’s withdrawal.
Of all the speakers, Beshara Doumani, was the only one who refrained from being sucked into the Hizbullah-propaganda vortex – at least as far as I remember. I found his contribution deeply problematic for a number of other reasons. I hope to deal with these as well as with in more detail in a future post.
Posted by Amos at 12:12 AM

I am impressed by both your objective anlysis and your intellectual discussion of the issue. Thanks for the perspective.

Never forget that the people you are dealing with are hardly even human.

They are devil's spawn.

If you disagree, check out this video.