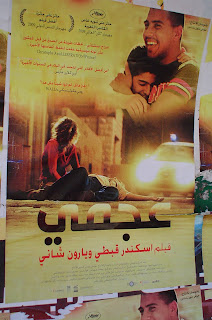 Ajami movie poster up in Nazareth
The Israeli Film Academy has just wrapped up its annual awards ceremony. The Ophir Prize is often called the "Israeli Oscar" and this year, Haifa was awarded the honour and hosted the ceremony in the Auditorium (the same complex where the Cinematheque is located). This makes the city look really happening, especially as the decorations for the annual International Film Festival, which launches next week, are already up.

The film that came out as the big winner this year was none other than "Ajami," named after the Jaffa neighbourhood which it is based in. It took home the Ophir Prize for best film, best directing, best script, best editing, and best composition. Co-directed by the Jewish-Arab duo of Scandar Copti (resident of Ajami) and Yaron Shani, the film reflects the mixture of Jaffa. It's a gripping tale of all the balagan that goes on in Ajami: relations between Jewish and Arab neighbours, West Bankers and Israeli Arabs, Christians and Muslims, and everything in between. Most of the dialogue is in Arabic, but the local version of it, which is peppered with Hebrew.
I couldn't find an English trailer; for now it seems there's only Hebrew and Arabic.
ADDENDUM: It seems that the people at Global Voices really enjoyed my piece. Their post on Ajami, published a day after this one, is surprisingly similar to mine.
Posted by Carmia at 1:23 PM

Looks amazing! I wonder if there is a screening with English subtitles somewhere, some of us can't read Hebrew so fast!

So is it really any good? It sounds like it could be an Israeli equivalent of "The Wire."